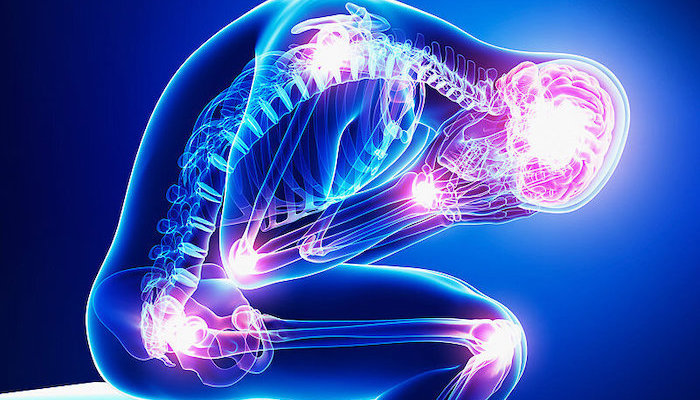 It’s scary being diagnosed with Fibromyalgia. But with smart and careful management, Fibromyalgia need not hold you back in life.

Fibromyalgia is a chronic disorder that causes widespread pain, along with fatigue and a variety of other symptoms. It is sometimes called fibromyalgia syndrome (FMS). It’s a condition that is not well understood but is being researched more all the time; more answers are coming to the forefront and with them, a better understanding of how to help fibromyalgia patients.

The name fibromyalgia can be broken down. The ‘fibro’ part is the Latin word for fibrosis tissue, which essentially means tissue that has been damaged or is not reacting in an appropriate way; the ‘myo’ comes from the Greek word for muscle in relation to the widespread muscular pain and the ‘algia’ part of the word, means pain in Greek.

Who Can Have Fibromyalgia?

Anyone can have fibromyalgia, it doesn’t discriminate. It’s a common disorder although there is still a stigma around it; between 2% and 4% of the general population are thought to have fibromyalgia as explained by this study.

Fibromyalgia is more common in adults than in children, and is more commonly diagnosed in women; this, however, doesn’t mean that more women actually have fibromyalgia than men. It’s actually thought that the reason more women are diagnosed is due to stigma, meaning that doctors are less likely to diagnose a man who comes to them with widespread pain and that men are less likely to seek help due to worry about the stigma they may face or the appearance of being ‘weak’. This study tested the prevalence of fibromyalgia in both genders and concluded that “We found no relevant gender differences in the clinical picture of FMS.”

It does seem that if you had emotional distress, physical or mental trauma in your life, this may trigger fibromyalgia to begin, but this is not yet well understood; this study found that “Although there is some evidence supporting an association between trauma and FM, the evidence is not definitive.” From what is known there may be a genetic factor to fibromyalgia, meaning that if someone in your family has it, you may be more likely to develop it, but more research needs to be done into this topic, as explained by this study.

Is It a New Disorder?

Since fibromyalgia has recently been more discussed and more awareness is being raised in a society in general, a lot of people seem to be under the impression that fibromyalgia is a new disorder. This is not in fact the case; fibromyalgia has a long history.

In fact, as far back as the 1800s fibromyalgia symptoms and the relevance of tender points were discovered; it went by different names and various theories were developed over the years, as with many diseases and disorders. In 1904, symptoms that mirror those of fibromyalgia were mentioned; Sir William Gowers presented the diagnosis of ‘fibrositis’, to cover symptoms like pain and fatigue among others. In 1976, the condition got the name fibromyalgia, as explained in this article.

This common misconception that fibromyalgia is a new disorder or a ‘last ditch’ diagnosis is incorrect; this stigma is something that needs to be reduced. Fibromyalgia has been around for years; it is completely valid and entirely real.

What Are the Symptoms?

The symptoms of fibromyalgia vary greatly, both from person to person and in an individual. Things like changes in the weather, how active someone is, how much stress they are experiencing physically and emotionally, and how much treatment they have received to cope with their disorder, can all affect the severity of symptoms and the impact on the individual.

The exact cause of fibromyalgia is still being researched and is not yet known definitively, but it’s essentially understood to be caused by problems in the way that our central nervous system processes pain. Acute pain is a protective mechanism, meaning that pain signals are designed to be sent out when we are experiencing pain so that we are made aware that there is a danger that we need to address or an injury that needs to be treated. Chronic pain means that the wrong pain signals are being given out, meaning that we are experiencing pain and other symptoms when we shouldn’t be: this is also known as central sensitization.

Medical professionals aren’t sure what starts fibromyalgia, but genetics are thought to play a part and physical or emotional trauma seems to be a trigger for the start of symptoms as explained here.

How Severe Can Fibromyalgia Be?

Fibromyalgia is such a varied disorder in that it can vary in severity greatly. For example, an individual can have low pain or even no pain days within which their symptoms are barely noticeable and barely affect their life, all the way up on a sliding scale to severe pain days wherein they feel barely able to get out of bed. Some people may experience their symptoms in such a severe way that they are mostly bedbound, others may find that they are able to be active while using mobility aids and others may function without any issues.