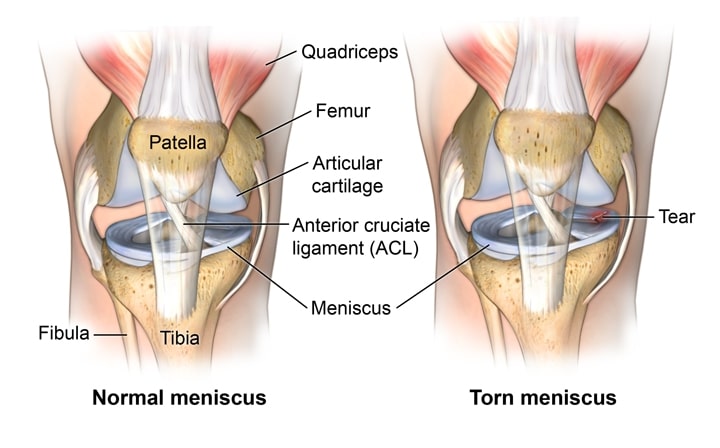 Using sheep, whose knees are similar to human knees, researchers got the meniscus to regrow itself by implanting a biodegradable plastic device to lure stem cells and help them grow.

Every year about 1 million people have surgery to repair a tear in the meniscus of their knee, according to the American Academy of Orthopedic Surgeons. It’s an injury that can’t be fully fixed since cartilage doesn’t repair itself very well. Even patients who have surgery often go on to develop arthritis. Some eventually need a knee replacement.

The clear need for a new approach has led scientists to try using stem cells to regrow the torn cartilage. A new method described in a paper in Science Translational Medicine suggests doctors may be very close to offering patients the chance to regrow their own meniscus.

The researchers used the same biodegradable plastic found in surgical sutures to 3D-print a model meniscus. They loaded the replica with proteins that work something like a magnet for stem cells, drawing them to it from bone marrow. Researchers also loaded the model with growth factors. These helped spur the stem cells to develop into the specialized collagens and fibers that make up cartilage.

When they attached the devices to the uninjured part of the meniscus in seven sheep, the stem cells grew a new, healthy patch of tissue. Sheep have knee joints that are very similar to human knees.

Twelve weeks after surgery, the sheep were back to romping around with full mobility. The plastic had completely dissolved.

Teaching the Body to Heal Itself

The biodegradable plastic device has built-in chemical cues that let doctors control where and when the growth factors go. This gives the knee a blueprint of how to rebuild itself.

“We can control the location and also the timing of the growth factor and recruit the body’s own stem cells, and they turn into different types of tissue,” said author Chang H. Lee, an assistant professor of craniofacial engineering at Columbia University.

Why do they need a plastic scaffold in the first place? If doctors try to simply inject stem cells into the joint, they may get carried away in the bloodstream before they can make needed repairs. “Honing,” or drawing the body’s own stem cells toward a medical patch, as researchers did in this study, is just one way of making sure the cells stay put.

“You can’t just inject them into the joint because they’re going to migrate away and stop being meniscus,” said senior author Jeremy Mao. Mao is co-director of the Center for Craniofacial Regeneration at Columbia University.

Treatment Is Nearing Use in Humans

Stem cells are “very, very close” to being used to repair damaged knees in humans, according to Dr. Benjamin Ma, a professor of orthopedic surgery at the University of California, San Francisco. Ma was not involved in the study.

But it will be a long time before knee replacement surgery goes to the way of the dodo, said Ma.

Without healthy cartilage to pad the bones that meet in the knee joint, the bones become battered and misshapen. There’s nothing a new meniscus can do about that.

People with new injuries will be the first to have the change to regrow damaged cartilage. That could happen within a few years, according to Ma.

But first, the Columbia researchers have to prove the technique works using a larger test group of sheep.

In another stem cell study in the same issue of Science Translational Medicine, researchers suggest that with a minor surgical procedure, doctors may be able to use stem cells from the eye to replace an injured cornea.

Corneal injuries cause scarring that damages vision. Doctors treat the problem with corneal transplants, but there aren’t enough donor corneas to go around. The transplant surgery is also invasive.

The researchers found that they could grab stem cells from elsewhere in the eye and grow them in the patient’s own serum in the lab. They could then put them onto the injured cornea. The cornea healed itself with healthy tissue instead of scar tissue.