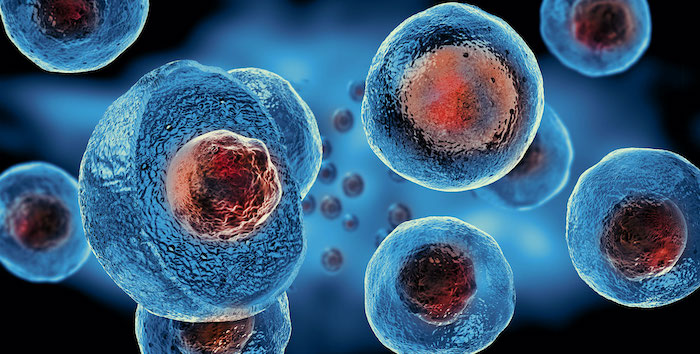 Recently, stem cell transplantation has been frequently applied to the treatment of pain as an alternative or promising approach for the treatment of severe osteoarthritis, neuropathic pain, and intractable musculoskeletal pain which does not respond to conventional medicine. Stem cell-based therapies have been realized to be a potential treatment option for articular cartilage repair in patients with knee osteoarthritis, neuropathic pain, and intervertebral disc disease.

The main idea of applying stem cells to neuropathic pain is based on the ability of stem cells to release neurotrophic factors, along with providing a cellular source for replacing the injured neural cells, which make them ideal candidates for modulating and possibly reversing intractable neuropathic pain.

Hofstetter et al. and Fischer et al. confirmed the relief of pain and recovery of motor function by directly administering neural stem cells to a spinal cord injury model. Stem cells would migrate to the injured site, which is called the homing of stem cells. Thanks to the homing properties of stem cells, relieving neuropathic pain can be achieved even by intravenous injection.

When human bone marrow-derived stem cells were directly administered to the cerebral ventricle of rats or intravenously, they were found to settle in the spinal cord or prefrontal cortex. The stem cells given intravenously were apt to be trapped in the lung when passing through; therefore, only a small amount of the stem cells can survive and move to the injured site. From such a point of view, selecting the intrathecal route and targeting the pain pathway of the dorsal root ganglion or spinal cord directly looks like the obvious method for stem cell delivery in a spinal cord injury model.

During the early phase in the research of stem cells, the focus has been directed toward the regeneration of tissues. Recently, the focus has been more on the side of the paracrine effect, which is known to participate in tissue repair by stimulating surrounding cells to be recruited and by suppressing the inflammation responses. Stem cells do not need to make direct contact with the injured cells to have a neuroprotective effect as is revealed in vitro studies.

Both the neurotrophic factors and neuroinflammatory cascades caused by immune and glial cells also play an important role in the development of neuropathic pain. When the balance between both factors is destroyed, and the inflammatory side becomes dominant, neuropathic pain is more likely to occur. Significant increases in IL-1β and IL-6, but not TNF-α, in the cerebrospinal fluid of complex regional pain syndrome patients, which indicates the activation of the neuroimmune system, as compared to controls, was reported.

Various stem cells including human mesenchymal stem or stromal cells are known to secrete neurotrophic factors and anti-neuroinflammatory cytokines which have neuroprotective and even regenerative effect. With these paracrine effects, stem cells inhibit the hazard of the inflammatory cytokines. Neurotrophic factors, especially nerve growth factor (NGF) and glial cell line-derived neurotrophic factor help the injured nerve restore itself in maintaining the function of a nerve, promoting regeneration, and regulating neural plasticity in response to injury. MSCs reduce the secretion of inflammatory cytokine in T-cells such as IL-1β or TNF-α. In addition to the paracrine effects, intrathecal administration of MSCs reduces the reactive oxygen species and pain behavior in neuropathic rats.

There have been three reports on diabetic neuropathy in an animal model. Stem cells were administered intramuscularly to the hind leg. Subjects were observed for 2 to 16 weeks and showed improvement in nerve conduction velocity through the paracrine actions of growth factors secreted by MSCs. MSCs, differentiated into anti-inflammatory cells, attenuated pain behaviors of streptozotocin-induced diabetes in a rat model. A report said that patients with type I diabetes who received MSCs did not need analgesics after the dramatic pain reduction at two months, blood flow was recovered after six months, painlessness after nine months, and all tissues with infection and necrosis were recovered.

In an animal model of spinal cord injury, stem cell therapy reduced pain by differentiating into glial cells and releasing trophic factors. That is, stem cells contribute pain medicine as small analgesic bio pumps in addition to supplying cellular sources of tissue regeneration. When the neural stem cells were injected intrathecally into the spinal cord injury rat model, they would have an analgesic effect as small bio pumps releasing inhibitory neurotransmitters, such as gamma-aminobutyric acid or glycine. Other animal studies reported that the transplantation of MSCs for the treatment of spinal cord injury produced gait improvement and evidence of histological regeneration of the nerve. In a meta-analysis of an animal model, the efficacy of neural stem/progenitor cell transplantation was higher in transection and contusion models than in compression ones. The shorter the interval between injury and treatment, the better the functional recovery and sensory condition. Immunosuppressive drugs used for avoiding rejection negatively affected motor function recovery. Scaffold use could boost efficacy on motor function recovery. However, other reports said that the neural stem cells rather increase the pain of spinal cord injury. Neural stem cells survived and differentiated into a predominately astrocytic population; however, the locomotor function was not improved and significant forelimb thermal and mechanical allodynia was observed.

A clinical case of a patient with an incomplete spinal cord injury at the T12-L1 level and a crush fracture in the L1 vertebral body was administered several doses of allogeneic MSCs intrathecally and intravenously. The patient reported a marked decrease of neuropathic pain, an improvement in muscle strength, and increased dermatomal sensation, and a recovery of urological and sexual functions.

2-3 Chronic Constriction Injury (CCI) – Intravenous administration of bone marrow-derived mononuclear cells reduced neuropathic pain in a sciatic nerve CCI model. Systemic administration of human MSCs attenuated the neuropathic pain in a spared nerve injury mouse model. The human MSCs were mainly able to home in on the spinal cord and pre-frontal cortex of neuropathic mice. It reduced the level of IL-1β and IL-17 and increased the anti-inflammatory cytokine IL-10 and the activity of macrophages.

Seven studies involving a sciatic nerve injury model were reviewed. In 4 of them, stem cells were given intravenously. For the other 3, stem cells were placed directly on the sciatic nerve, the L4 dorsal root ganglion, and the lateral ventricle of the cerebrum, respectively. Administration to the lateral ventricle was intended to allow observation of the influence of supraspinal regulation of neuropathic pain. Observations were made for 1 to 90 days after stem cell implantation; reports said that most of the allodynia and hyperalgesia had decreased.

The expression of TNF-α and IL-8 in the nucleus pulposus of degenerated discs was much higher than that of herniated discs. That would be a reason why the level of pain is more severe in patients with a degenerated disc. When patients with degenerative disc disease were treated with autologous expanded bone marrow MSCs injected into the nucleus pulposus, the pain and disability were improved, and were comparable to spinal fusion surgery, although disc height was not recovered.

A systemic review of autologous MSC injections for the regeneration of intervertebral discs was conducted on a total of 98 patients and 122 treated levels in seven studies. Bone marrow-derived MSCs harvested from the iliac crest represented the most common type of injected cell. Patients with fractures of the trabecular bone and intervertebral discs with a complete radial fissure were excluded because the non-integrity of the annulus may allow the injected stem cells to escape. Patients with low back pain due to initial intervertebral disc degeneration and low-stage radiological degeneration were eligible for the stem cell infiltration. The average Oswestry Disability Index and visual analog scale scores improved at the one-year follow-up. Quantitative improvements, such as T2-weighted magnetic resonance image scans, protrusion sizes, and disc bulges also improved.